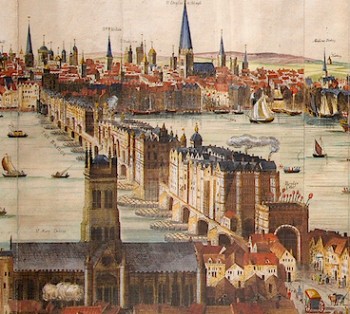 Immerse yourself in the lost world of Shakespearean London on this special time-travelling tour brought to vivid life by historian and broadcaster Dr Matthew Green, set in the year 1603.

Be harrowed by fear and wonder as you step into the timbered, sodden streets of Shakespeare’s neighbourhood where the air is foul with the miasma of tanneries and rotting offal, visit the Bankside bloodsports arenas where dogs are flipped through the air like pancakes onto the very shoulders of spectators and their bones are crunched by grizzly bears; venture into a creaky tobacco house where the Mermaid wits – the first generation of chain-smoking intellectuals – sit on hogsheads ‘drinking’ the ‘holy herb’, the smoke the emissary of their prayers; hear how Sir Francis Drake lost his mind as he traversed the globe and touch the very timbers of his craft, The Golden Hinde, in its dock.

Immerse yourself in the world of the Bankside playhouses – the Rose, Swan and Globe – and hear tales of their violent and obstructive audiences, artificial thunder, bladders brimming with pig’s blood and other early special effects.Visit a Southwark stew, the CLINK prison, take in the mesmerising panorama from the dark and breezy walkways of London Bridge, paying your respects to the Keeper of the Heads high up on London Bridge, strumming his lyre to the light of the moon, amidst all the smiling skewered skulls.

With its tobacco houses, awe-inspiring bridge, knot gardens, and timbered playhouses, you’ll discover a city of dominion and discovery but of violence too – the city has not yet shaken off its medieval past – and you should prepare to be plunged into a violent world of brothels and brawls, bubonic plague and puritanical rage.

The tour will end in the Cross Bones Graveyard with the chance to connect with the living and remember the Southwark’s Winchester Geese.