An Oyster Tour of Soho and Mayfair 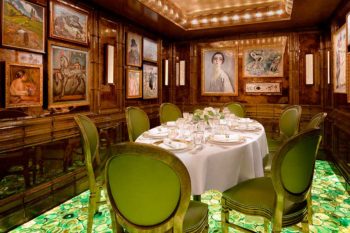 Eat oysters and trace luxury and decadence through time on this delicious whirlwind tour through two of London’s most famous and iconic districts — decadent Soho and Elysian Mayfair — with historian and broadcaster Dr Matthew Green and learn about the apotheosis of the humble oyster from staple of the poor to aristocratic decadence.

On this enlightening and epicurean tour, you will learn about the rise of the West End and the revolution in urban living that it entailed, while taking in oysters, champagne, and some of the finest architecture in London.

In the 1660s, something extraordinary happened to London. A series of gorgeous, lantern-lit squares of tall neoclassical townhouses fronting onto communal gardens emerged to the west of the City. Galvanised by the Great Fire, they soon filled up with the lordly and the louche, and in time coalesced into the West End, the jewel in London’s crown.

In Mayfair, we will explore some of the most gilded squares in the world — the untrammelled splendour of Grosvenor Square, and Berkeley Square, a mecca of exclusive gentlemen’s clubs — and also seek out some of the more village-y backstreets and mews, harking back to Mayfair’s rustic origins as an annual fair where oysters were consumed, prodigiously. We will saunter past the seductive glass shopfronts of Mayfair’s unofficial high street — Bond Street — the most fashionable shopping street in 18th-century Britain, and explore the courtyard of Burlington House, the area’s sole surviving nobleman’s palace, home to the Royal Academy.

Soho was less august and more cosmopolitan than its western neighbour, absorbing immigrants, refugees, artists, writers, actors, musicians and prostitutes who lent it a raffish air. We’ll seek out some wellsprings of bohemian energy, tucked away in its narrow, twisting streets: the rock’n’roll espresso bars that rejuvenated Soho after the war, the concrete monstrosity on Broadwick Street where William Blake was born and the recording studios off Wardour Street where David Bowie recorded Ziggy Stardust. Amidst the gorgeous auburn townhouses, we’ll also consider the rise and fall of Soho’s sex industry – all interspersed with delicious oysters famed for their aphrodisiacal qualities.

Today, Soho’s countercultural pulse beats fainter thanks to skyrocketing rents and once residential Mayfair has been colonised by hedge fund managers. As well as teaching you about the origins and evolution of the West End, the tour will generate a tinge of nostalgia for a vanishing world, and sharpen your appetite for the once humble now decadent maritime wonder: oysters.