A Whirlwind Tour of Roman London 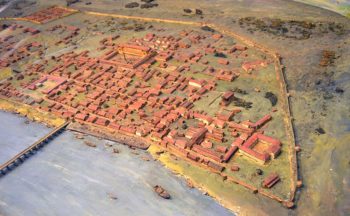 Experience the rise and fall of Roman London on this immersive whirlwind tour led by Dr Matthew Green, with costumed actors and musicians animating scenes of everyday life in one of the remotest outposts of the Roman Empire, and revealing how the lost city continues to shape our experience of London today.

In AD 47, the Romans founded a colony at a convenient bridging point across the river from their South Works (Southwark) which, in time, would sprout into a formidable fortress-like city with a population of 45,000 — Londinium, a place which, although submerged in today’s cityscape and largely hidden from view, continues to profoundly shape how we experience modern London.

Experience, on this tour, how Londinium grew into one of the most extraordinary cities in the empire, a mart of people and ships from all over the world buttressed by Corn Hill and Ludgate Hill, ribboned by now-lost rivers, swaddled in a thick stone wall and watched over by the sinister Barbecan (fortress). Within these bounds lay the Roman’s signature grid of arrow straight thoroughfares bespeaking  power unopposed, some of which survive on today’s map as unusually straight streets (like Cheapside and the Kingsland Road).

Have evoked, on their very sites, the soaring temples (including one, to the goddess Diana, on the site of St Paul’s Cathedral), semi-rural villas with beautiful mosaic floors, vineyards, garrisons, brothels, wharves, wine-houses, bustling fora, open-air theatres, blood-soaked gladiatorial arena (now Guildhall); see the ancient port at Queenhithe once with cogs and smacks piled high with salt and herring and Persian dyes, and now home to a mural celebrating Alfred’s reconquest of Londonium; touch with your own hands forlorn chunks of the original Roman wall adrift in the steel skyscrapers of the City; see gorgeously intact sculptures of forgotten heroes and the artefacts of everyday life in the Temple of Mithras Museum; meet some of the original citizens of London in full Roman attire and regalia.

Towards the end of the tour you will experience how what seemed like such a resilient city, arising from the ashes of Boudicea’s Blitz and more, suffered a piteous fall with the disintegration of the Roman Empire in the fifth century AD degenerating into a ghost metropolis infested by colossal weeds, brambles, wolves, semi-feral dogs and cats and Viking marauders as Londonium slunk out of its walls and reinvented itself as Lundenwic, a sprawling Anglo-Saxon port centred upon today’s Covent Garden, until King Alfred led the reconquest of the ghost metropolis in AD 871, laying down a system of streets, wards and parishes that drew heavily from its Roman blueprint.

You will leave the tour with a clear sense of how our experience of London today continues to be shaped by Londonium; an insider’s knowledge of the hidden treasures of Roman London; and an awful premonition of what could easily lay in store for London following environmental or political apocalypse.